On an unusually chilly day in the skies; Hestia, the Greek god of architecture was having a morning cuppa with Zeus. Hestia seemed to stare at the skies blankly and fidgeted. Zeus realised there was something Hestia wanted off her chest.

Zeus enquired, “Hey, fair lady, what seems to bothering you?” in a newly learnt English accent! He had just spoken to Jesus and was impressed by his English skills and wanted to give it a go himself.

Hestia replied almost instantly,” Hey, Zuey, you do know that I take great pride in my work and have never really made any mistakes in architecture and planning our pretty little blue planet. But there seems to be an accounting issue and I’m unable to account for a few pretty hills that were supposed to go to the Elysium. I have been looking all over the skies and have even asked Hermes, Apollo and Cronus for help.”

She paused taking a deep breath, ” But I haven’t found them yet! I had made them with great care and they were supposed to be the Disneyland of heaven. But not so sure now. Can’t really figure out how they disappeared overnight”.

Zeus burst out laughing and pointed her towards the small blue dot under his feet and they zoomed in. As soon as the cosmic lens focussed, Helthia’s wrinkles smoothened and her pulse rate normalized. She realised that was a masterstroke from Zeus, the king of everything!

So that’s how Meteora was born.

At least that’s the story I made up for my three-year-old son. The only thing resembling a fact in that story is that Meteora belongs in heaven and definitely not on this blue planet. You will admit this when you first glimpse of the out-worldly rock formations that not surprisingly house monasteries atop. No thanks, to Zeus!

Meteora should probably be the number one destination in the whole of Greece and for that matter the whole of eastern Europe. But, you see there are those pesky little gorgeous Greek islands that hypnotize you and hide the wonder that is Meteora from most Greek itineraries. The worst bit of that is that Meteora is just a few hours drive from Athens and even then most give it a miss. I know weird!

Meteora is basically a bunch of monasteries sitting pretty atop conglomerated Calcerous and sandstone rock. These hills were theoretically formed by crushing tectonic plates and the monasteries by Japanese grade industrious monks and nuns.

In the 14th century, a monk Athanasios Koinovitis and his followers came to Meteora, in search of a group of ascetic hermits that had developed a religious stronghold in the region. He was blown away by the hermits’ free-climbing skills that had allowed them to live in the caves and fissures high above the ground and saw an opportunity to create a convent where his flock could meditate and worship in peace. Employing the hermits as climbing mentors, the new visitors conquered the surrounding mountains and set about creating their own holy haven. It was then, from 1356 to 1372, that the first Great Meteoron Monastery was born. (Ref) Meteora literally means “suspended in the air,” and the way the religious house clung dangerously to the formidable peak quickly gave its name to the entire district. Years later when the Turks advanced on northern Greece, more monks escaped persecution by climbing the mountains to safety. Over time 24 monasteries were built, with the steep pillars providing protection from the warriors below. A network of ropes, pulleys, baskets and ladders were used to lift worshipers and supplies into the monasteries, and these were raised in times of danger to deny access to anyone who posed a threat.The method worked, and the Orthodox monks easily survived centuries of war and battles. Today, six of these monasteries remain, segregated between male monks and female nuns, and visitors are welcomed with typical wide-armed Greek hospitality.

Now the six monasteries offer sweeping views of the valley and a peaceful abode for the 60 odd monks and nuns!

Once you decide you want to see them, Kalambaka is your destination from Athens. Book a hotel there and stare at the outcrops as you climb up either on wheels of even better on feet!

Must see in Meteora

I must admit, this must-see section here kinda makes no sense as the whole place is a must see. Anyway here goes nothing!

1. Great Meteoron or Megalo Meteoro or Megachurch or Metamorphsis Monastery: This is the biggest and raddest of them all and also built upon the highest rock. It offers amazing views of the valley below and the snow-capped peak in the horizon. It also contains some of the most beautiful wall paintings and post Byzantine Mural art that can be found in Greece as well as a museum collection in the refectory. It would in most cases be your first and longest stop.

2. Varlaam Monastery: My favourite of all. In 1350 a daring ascetic named Varlaam ascended to the rock. The monastery was named after him. He built three churches, a small cell and a water tank. After his death the rock remained abandoned for about 200 years. In 1517/1518 the two founders of the church, the priest-monks Theophanes and Nektarios Apsarades reached the rock. They were two rich brothers from Ioanina. They found the rock of Varlaam abandoned, so they started to construct the first buildings from the beginning. The transportation of the materials lasted 22 years and the result is amazing to say the least.

3. Roussanou Monastery: This super friendly monastery is run by nuns. It was partially destroyed by the Germans in the world war and has been reconstructed painstakingly. It is quite small and the paintings are wearing off. But they do have a rustic look about them. 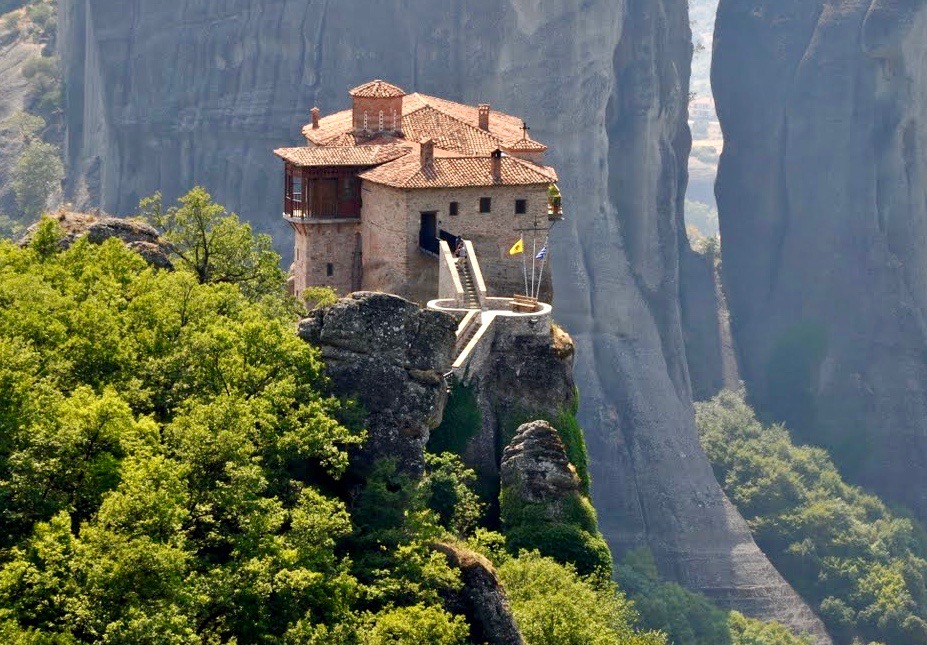 4. Holy Trinity Monastery:  This monastery offers great photo ops of the valley below. It was where the James Bond movie ‘For Your Eyes Only’ was filmed.

5. St Stephen Monastery: Another monastery that suffered during the world war. It is famous for the skull of St. Charalambos, which is believed to have miraculous healing powers. Lovely place with equally great views from atop.

6. St. Nicholas Anapausas Monastery: Don’t be fooled by its modest size. This place is overlooked by most tourists and it allows you to feel more attached to this place somehow.

This site uses Akismet to reduce spam. Learn how your comment data is processed.